Warning: include(includes/header-studies.php): failed to open stream: No such file or directory in /nfs/c01/h06/mnt/3067/domains/thenorthstate.com/html/ewan-gibbs-america.php on line 1


Warning: include(includes/nav-case-studies.php): failed to open stream: No such file or directory in /nfs/c01/h06/mnt/3067/domains/thenorthstate.com/html/ewan-gibbs-america.php on line 20

Ewan Gibbs : America is the first major publication devoted to the drawings of the acclaimed British artist. Initially, the book was planned as a small piece to compliment an exhibition at the Davidson College Van Every/Smith Galleries in late 2010. However, the "travelogue" design concept motivated the curator to expand the scale of the project to become a 102-page survey of Ewan Gibbs' drawings of American cities. In order to effectively reproduce the intense detail within each of the meticulous drawings, the book was produced using a duotone process to simulate the values of the artist's pencil and pen marks.

"The North State offers unsurpassed excellence in branding and design strategies. Most importantly, they listen to their client's needs from project concept to delivery." 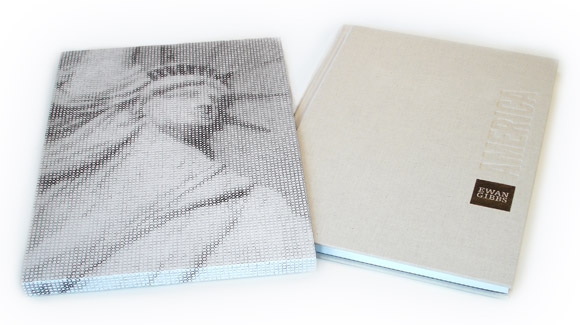 In June of 2010, Brad Thomas, curator of the Van Every/Smith Galleries at Davidson College, engaged The North State in creating a book to mark a planned exhibition of drawings by acclaimed British artist Ewan Gibbs. Following their collaborative success with the design of a previous exhibition book (Magdalena Abakanowicz), Thomas sought to create another small book with design the studio. Due to an undeniable level of excitement by Thomas and The North State, the project quickly evolved to an idea of much greater scale.

Due to an undeniable level of excitement by Thomas and The North State, the project quickly evolved to an idea of much greater scale.

The initial concept for the gallery’s exhibition was centered on the works of Ewan Gibbs that represented American cities. These were to be drawings created as a result of the artists’ earlier travels across the United States. The early research and reference brought an interesting opportunity to light. Although a few small books that featured insight into Gibbs’ grid-based pointillism process had been made, Brad Thomas wanted to create the first major publication of Gibbs' work. He made it clear that he wanted the The North State to design something fitting the opportunity.

The decision was made by Thomas to showcase works beyond what would be displayed at the Davidson College exhibition. The book would extend beyond the role of companion to the exhibition and present a unified theme of American places as Ewan Gibbs had interpreted them. 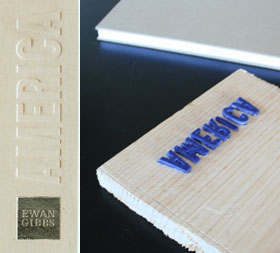 Brad Thomas embraced the role of Editor, and established a central theme to the selection of the drawings. The book would not only introduce Ewan Gibbs to new audiences, it would provide an equal exposure of the technique and mindset of the artist in the creation of his work. Thomas chose to parallel the artist execution with that of his subject matter. As Thomas suggests in the book's introduction, “His labor-intensive process underscores the order and logic of urban and natural environments while exposing a complex matrix of opposing and complementary forces.”

Thematically, the project took root in the direction of a travelogue, arranging the artist's works as a narrative journey across the US. Initially, the book’s identity was based solely upon drawings of select city scenes. Yet, the concept inspired Brad Thomas and The North State to make Ewan Gibbs: America a broader experience. Gibbs had created a series of incredible work based upon baseball, “The Great American Past Time”, and a period spent in the wilderness of Colorado. Thomas knew that these observations and interpretations from Gibbs’ travels were essential to the collection. 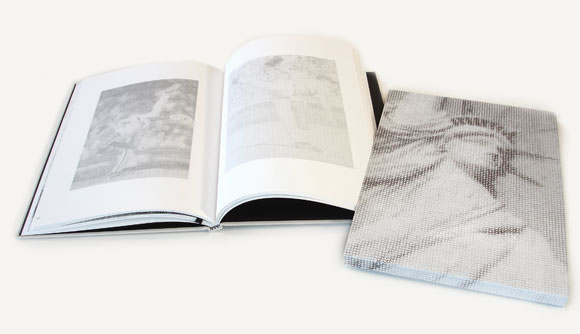 The first concepts for the book binding and cover presented by The North State were key to the direction of the project. The studio proposed that the book embrace the travel journal theme through a linen hard-bound cover, with titles embossed and foil stamped. In pitching this concept, rough mock-ups were created to present the potential look of the embossed cover with a slip cover that would showcase an iconic, detailed image of Gibbs’ rendering of the Statue of Liberty. 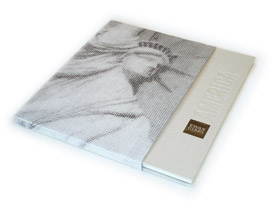 Ewan Gibbs often works within consistent sizes and dimensions to organize his drawings and put order to his method of execution. As digitized photos and slides arrived for The North State, a realization was made about the proportions of the works. Nearly all of the pieces were created on A4 paper, with consistent margins. Fortunately, the drawing that did not match the A4 size dimensions appeared to always match the same proportions. This information allowed for a quick adjustment to the format of the book, aiding a core goal for the design. While the travelogue concept helped to unify and structure the material, the book would be required to maintain an academic quality and it was imperative that Ewan Gibbs: America create a sense of an up-close, intimate experience with the artist’s works. By providing the reader with reproductions of the artwork at nearly the exact size as they were created, the immense amount of detail resulting from Gibbs’ intriguing technique could be revealed. 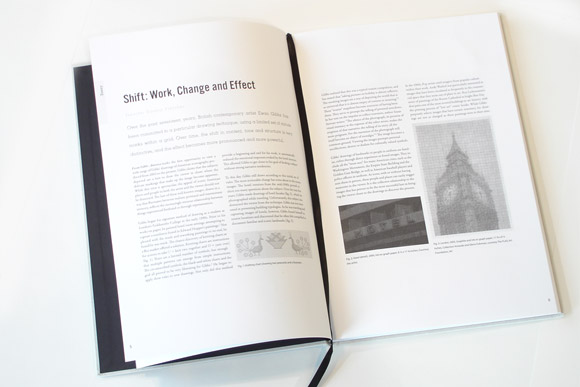 In his drawings, one can observe that Ewan Gibbs has composed a thoughtful grid with intentional margins upon the paper. Within each unit of the grid, a mark is made. These marks may be strokes, slashes, or circles. The size, weight, and density are made to represent the corresponding small spacial area of a scene or composition. In reproducing the technique, The North State coordinated with an impressively knowledgeable consultant in Ken Kumpe of ImageMark, printer of the book. The most important aspect in reproducing Gibbs’ work rested in the values existent within the drawings. To accomplish this, the design team worked with Kumpe to explore and test a duotone process, mixing densities of black and warm gray inks to simulate the pencil and pen works. 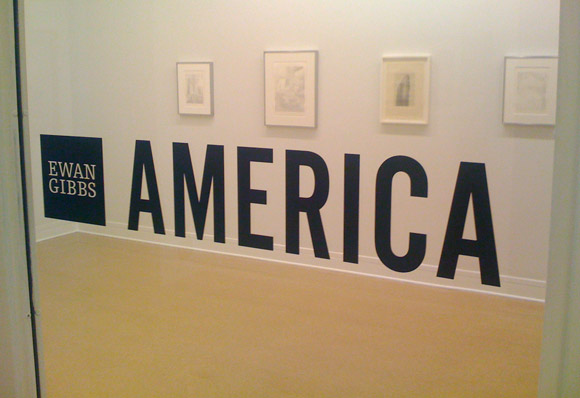 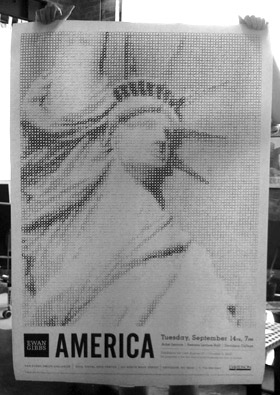 On August 27th, 2010, the Van Every/Smith Galleries of Davidson College opened their exhibition of Ewan Gibbs’ work. Signage and on-campus promotions of the exhibition mirrored the design of the forthcoming book. Gibbs’ drawings appeared at several galleries across the US as the book was printed and released.

Editor Brad Thomas secured distribution of Ewan Gibbs: America through Distributed Art Publishers, a distributor of more than 8,500 titles on art and visual culture from the world's most distinguished museums and fine art publishers. D.A.P. selected the book for inclusion in its spring 2011 catalogue.


Warning: include(includes/panels-work.php): failed to open stream: No such file or directory in /nfs/c01/h06/mnt/3067/domains/thenorthstate.com/html/ewan-gibbs-america.php on line 108

Warning: include(includes/footer-global.php): failed to open stream: No such file or directory in /nfs/c01/h06/mnt/3067/domains/thenorthstate.com/html/ewan-gibbs-america.php on line 110